What is CMR document? 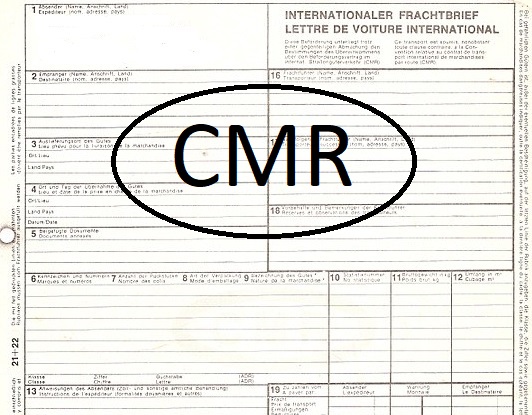 What is CMR document?

If all the documents you need for transport are confusing – we are here to make the whole process easier for you. You must have heard about the CMR document at some point. We are here to solve your doubts about what this very important document is and more importantly – how you can protect your cargo from damage when it comes to international freight.

The vocabulary of transportation should not scare you, everything is basically very simple. Do you speak French? Don’t be scared, it’s okay if you don’t, because you won’t need to. But it’s time to take a lesson on what a CMR document is, so let’s take a quick look.

What does CMR acronym mean?

We have mentioned French, so it’s time for a brief language and history lesson. What does CMR acronym mean? CMR is an acronym for “Convention relative au contrat de transport international de marchandises par route”. Before you start flipping through dictionaries, we are here to help you. The translation is – International Agreement on Contract for the International Transport of Goods by road. This important document dates back to year 1956. It was originally signed by ten countries in Geneva on May 19th 1956 because of numerous problems with international transport. The founders of this agreement were Belgium, Germany, France, Luxembourg, the Netherlands, Austria, Poland, Sweden and Switzerland. Fortunately, over time, the importance of this agreement has become more serious, so now this agreement has been ratified by as many as 44 countries in February 2017. It has been recognized by all European countries, two African countries (Tunisia and Morocco) and some of the countries of the Middle East and Central Asia.

What is governed by this agreement and document?

It is important to make an essential distinction: CMR stands for the agreement itself, while, on the other hand, the CMR document is a standardized form prescribed for use when goods are imported into or exported from at least one country that is a party to the CMR agreement. On February 24th 2017, the UN expressed its support for the eCMR, the CMR document in electronic form. This made it easier to collect data, left plenty of room for cost savings and innovation, and opened the door to digitization.

The CMR document must contain the following information: the sender of the goods, the recipient of the goods, and precise information on the type and quantity of goods. The CMR document, also known as the “consignment note”, is evidence of a contract of transport by road, specifies the scope and responsibility for the operation performed and identifies the participants and the goods being transported. The subject of the insurance of goods is the degree of liability which the carrier takes over in the event of proven damage to goods in international transport by road. These mainly include damage or theft of goods (in the case of robberies) or delays in delivery of goods. In addition to all of the above, the subject matter of the insurance is the costs that are part of the damage assessment and the costs of litigation arising from unreasonable or unrealistic claims of transport service users or carriers.

In the event of a traffic accident, the cost of loading or unloading into other vehicle is also taken into account in order to reduce damage or avoid further damage.

What is not governed by the CMR document?

However, there are also cases that are not regulated by the CMR document, so one has to be extremely careful. For example money, documents or securities are not covered by insurance. Also, the transport of goods that is already damaged or transport for personal purposes cannot be subject to liability. Everything must be clearly defined and transparent.

Now, in the digital edition, e-CMR can be easily integrated with other aspects of the logistics process such as customs declarations – this makes the whole process much faster and more efficient.

If you have any doubts about the documentation, we are here to help. Contact our team and we will be happy to introduce you to the whole process and give you the best advice on how to protect your goods in the right way.